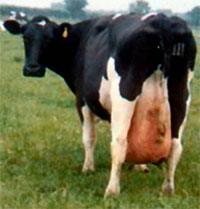 Mastitis is a biggest problem of the high yielding cows of the European and North American cows in India. This is because out of every three cow at least one suffers of mastitis. This decreases lactation yield by one to thousand. So it is big economic loss.

In west and beef eating countries if these cows are affected severely then they are used for meat but we cannot do that. However, if we know the details of lactation physiology, nutrition, treatment and management then we can deal with this problem. To know how milk is formed see the fig below. The milk is formed in the alveolar cells the aveoli is surrounded by blood vessels and the contractile basket cells. From the blood the nutrient like fat, protein and lactose is filtered in the epithelial cells. About 500ml blood is required to circulate round the alveoli to form 1ml of milk. These casein is added in the alveolar cells. Once the epithelial cell is full the basket under the cell influence of oxytocin release milk in teat cistern from teat cistern comes teat cistern then at time of milking the teat orifice is open and the milk is out. The milking should be done very quickly because the effect of oxytocin is for 10 to 15 minutes. The milking machine take out milk in 5 to 7 minute. No matter the milk is 5 kg or 15 kg. For it is necessary to understand the difference between the hand milking and the machine milking. Because many farmer think that machine milking causes mastitis. The difference is that in hand milking the teat cistern is closed from above and the milk is forced to come out whereas in milking machine the wall of teat are engorged by blood and milk from teat orifice out. So there is no question of damage by good milking machine. Now there are machines that tell about the onset of mastitis. If cow is not properly dried at 7 month of pregnancy and infused with antibiotic like cepravin which has cefalonium dihydihydrate,
A long acting antibiotic it does not allow the bacterial growth for complete dry period that is 60 days. During this period the regeneration of new alveolar cell takes place, the rumen is repaired, immunity is set right and above all the foot repair takes place. Thus cepravin is a great boon for milking cow. Then due to low immunity in late pregnancy and due to extortion of the cells because working for 7 10 month the likelihood of mastitis is great. Twenty days before and twenty days after the calving the udders prone to suffer of mastitis because before calving the foetus is growing very fast so nutritional deficiency will result in immune deficiency the same is true after calving because lactation stress is acute. The other indicator of mastitis is somatic cell count by somatic cell counter. AS the mastitis causing microbe attack and damage the alveolar cell the body defense system come in play and antibodies are released. These antibodies can be counted by flowcytometric method and a count over 200000 is indicative of safe milk. And count over 200000 is alarming count. This gives chance to control of mastitis. Which can be treated by nutrition or immunomodulation. Once the mastitis has occurred then the release of PG alpha 2 be checked and for checking bacterial growth anti biotic are required. I personally use Cobactan intramammary in which the basic compound is cefquinome which is very effective. You may use yelintra intra mammary, this has tetracycline, neomycine, baitracine and prednisolone and fiadyne, and it work well provided the cow is dewormed and treated for sub clinical theilerosis. The final dyne is flunixin this checks the release of endotoxin responsible for alveolar cell damage and flunixin lowers the release of PG alpha 2 which is responsible for fever, pain, edema and swelling. This is non-steroidal drug so it does not supress immunity. It has been observed that the mastitic cows are repeat breeder because of the bacterial toxin released by invading bacteria.

Some times after calving the milk of the calved cow is pinkish. This is because of the presence of red blood cells. Due to excessive flow of blood in udder tissue after calving the permeability of the blood vessels are permeable to the red blood cells so milk is pinkish or red. In such cases the vitamin C injection and intravenous calcium work well. It is not serious problem and even it is not treated in a week it goes away.

The proper disinfection of teat, hand, milking machine and milking room be maintained. After milking the teat orifice is open for ten to fifteen minutes so the cow should not allowed to sit. So serve with green fodder so while eating fodder it will be standing. If you will use best quality semen then the offspring or the progeny will not have problem of mastitis. Now the genetically injured cow are available which will not suffer of mastitis in future.
The mastitis problem is sever in hot and humid environment in high producing cows particularly 20 days before calving and 20 days after calving . So make it a point to not let cow calve in July, August, and September months. Thus no AI in November, December months. This is best rule to avoid mastitis in high yielding cows.