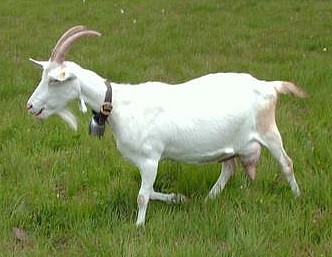 Most of our Desi cows are low milk producer, producing 2 or 3 lire of milk per day with a shorter lactation period of 150 days, these Desi cows are seasonal breeder giving milk in the summer months. However, some Desi milk breed like Gir, Sahiwal and Red Sindhi producing over 3000-litre milk in a 305-day lactation. The number of this breed is limited in a population on of 200 million cattle. This is a big burden on the country.

Further, the ban on cow slaughter, mechanization of agriculture and milk marketing has meant more exotic cows and buffalo. Under such condition the milk of goats like Saanen and Anglo Nubian got is a good potion. These two goats are European goat but they can thrive in India.  These goats give 4 to 5 litre of milk in 262 days lactation. They have a long breeding season.

The sale of their milk has no problem and the males are easily disposed of. Even Mahatma Gandhi advised the goat keeping. This goat can be introduced by artificial insemination or Embryo transfer technique. The frozen semen and embryos are available in the international market. The detail of these two goats is given below.

We compare these cow to the Anglo Nubian/Saanen goat, then it makes sense. Our goat is a meat type. It produces only 100-litre milk in a 100-day lactation. The Anglo Nubian goat is a cross between the Jamunapari goats. They can survive in a hot climate. So they are as good as Desi cow. Its housing is easy and they eat less fodder.

The Saanen goat is much superior to Anglo Nubian breed it is Swiss goat and it is suitable for hills region. Because the ban on cow slaughter the goat milk is an alternative. The detail of these to breeds are given below.

The Anglo-Nubian is a British breed of goat. It is a crossbreed goat, crossbred between British and Indian goat (Sirohi or Jamunapari). This goat can live in hot temperature. It is famous for the looks and the meat and milk production.

These goats are crossbred, so they have the features of two goats. They can live in high temperature, produces a good quantity of milk and also used for meat production. This goat contains the largest amount of fat in their milk by about 4%. The breeding season in these goats is much longer than other goat breeds, so it will produce milk for around one year.

The Saanen Goat is originated from Switzerland (domestic Swiss breed), this is well known for the good milk production, its milk is distributed over eighty countries in the world. It is a highly productive dairy goat. This goat is worldwide popular, the total world population of this goat is over 900,000, where 14,000 are in Switzerland. Because of its high milk producing capacity, it was exported world-widely. And it has given rise to more sub-breeds, by crossbreeding with local goats.

Saanen goats are commonly white in colour but sometimes light brown colour can be seen. This is the largest breed of Swiss goats. An adult male (Buck) Saanen goat weights about 70-90 kg and an adult female (doe) goat weights about 60-70 kg. The neck is long in size, but the legs are short, and short hairs are present on the body. Ears are always upwards. The udder of this goat is large. Some small black spots on the ear, neck, and in the udder can be seen.

The Saanen is the most milk productive goat in Switzerland, and also have the first place in milk production over the world. It has a lactation period of about 260 days and yields 830 kg of milk. On average, a Saanen Goat gives 3.8 litres milk a day (where Barbari has a lactation period of 100 days and gives 1 kg per day). And its milk has 3.5 % of fat and 2.5 % of protein quantity, which is good for manufacturing all the dairy products particularly cheese. This goat loves to stay in shady places, and cannot tolerate the sunlight highly. This goat breeds one time in a year and gives birth to one or a pair of a kid each time.

When it comes to feeding a high producing goat, the feed should contain all the nutrients, and extra proteins and energy. Good food and clean water should be provided every day.

This goat loves to stay in shady places, but it cannot tolerate direct sunlight. Housing should be shady and fully ventilated and cool place. Minimum and Maximum temperature in Switzerland is shown in the table below.

WHY GOAT MILK IS CONSIDERED SUPERIOR TO BUFFALO MILK

The fat in food is not broken down and broken down and is not goes in in body through the blood circulation. It is absorbed through the lacteal in the villi and circulated through the lymph. The absorption, the globule size, and the low-fat content of fat are some quality of goat milk which makes it boon to cheese making and human nutrition. (The fat content of human, goat, cow, and buffalo milk are 2, 3, 4 and 6 %) The fat %, globule size are very close to human milk so this milk is suitable for children and sick persons.

Goat browses on a variety of weed which is not sprayed with pesticides so it’s milk is free of the carcinogenic effect of pesticide. Further, the use of chemical fertilizer and genetically modified crops have an adverse effect on human health but the goat does not eat the crop. The grains from the genetically modified soy maize wheat are also fed to the goats raised for meat and provide milk.